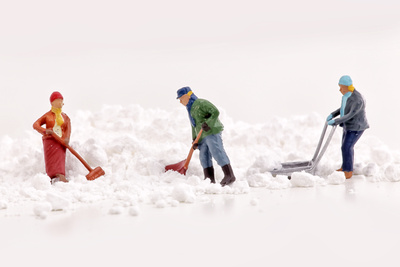 I know that we always laugh about England, when there’s a little snow and the whole traffic system grinds to a halt.

it is March 1st and I have to travel from Zürich to Lausanne and the next day on to Geneva and back home again. I had packed everything in my business rucksack, including pyjamas, gym clothes, toothbrush and computer and thought that I could scoot to the station and then travel on with the train.

When I looked out of the window in the morning, it was obvious that I could forget the scooter, as there was about 5 cm of fresh snow and it was still snowing. Pity. So I marched down to the tram stop, only to discover that the timetable had become useless. After 15 minutes anxiously waiting the tram arrived at last. In fact I arrived too late at the main station, but that didn’t matter, because my train was also delayed. And so it went all day. All public transport was experiencing delays, which were difficult to estimate. Quite honestly, the train was the best choice. Through the train window I occasionally saw the motorway, where the cars stood motionless in endless columns.

My hotel room was really cold and I was informed that unfortunately the heating could not be turned up. I slept fitfully and badly with my winter hat.

The train journey from Lausanne to Geneva the following day, which according to the timetable should take 45 minutes, lasted almost 3 hours and, as there were no buses from the station and taxis were a scarce commodity, I hoofed it through the deep snow by foot to my appointment. In the afternoon the snow stopped and finally the sun broke through. Geneva looked like a fairy tale, in a white dress with the warm sunrays, which stimulated the masses of snow to melt.

I thought that Switzerland can deal with snow fabulously. And honestly, the result was not that bad. I always arrived at my destination on the day, on which I should arrive. Perhaps a little too late, but because almost all were also, it didn’t matter. Finally, the feeling remains that after all Switzerland masters everything, even an unexpected quantity of snow in winter. Thanks.

One thought on “It’s winter and it’s snowing”