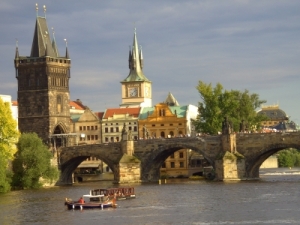 I spent two days in Prague on client business. And as my first meeting started early in the morning I had to travel on Sunday evening.

I took the opportunity and wrote to my former colleagues. It would be nice to meet a few of them again. Four replied positively and so five of us met in a small beerhouse. I have never really liked beer, but I didn’t want to be stand-offish right from the beginning and when Dani ordered five beers, I didn’t object.

Strange how time passes and how fates change. Today one of them is the headmaster of a high school, the other has a business for fine food and supplies numerous hotels in Prague, the third has a horse farm outside the capital and the last one earns his keep, as best he can, as a meditation guru, but is the most satisfied of all of them.

It was fun and cheerful and when the men had finished their beers, I asked the waiter to bring four beers and said I would pay the round. Together with the four beers, the waiter, who was serving us, pressed a till receipt into my hand. I looked at it and immediately saw that there were only two beers on it. I protested because it’s not in my nature to profit from the mistakes of others. Our waiter apologised and with his ballpoint added the missing three beers and took my money. I was taken aback. Last December the Czech Republic introduced a system, under which the transaction data must be immediately reported to the authorities. The objective of this exercise is said to be the curbing of tax fraud. Evidently the human  spirit is very inventive, when it’s a question of finding ways to smuggle money past the exchequer.

The next day I had lunch with one of my clients. We were in a top restaurant, not only as far as the prices were concerned, but also physically. Yesterday I was in the cellar, today on the 27th floor with a fantastic view over the whole city. Following the not really impressive meal I received the bill, printed on it „10% tip not included and in cash please“. I found that intrusive but OK. I suggested to the waiter he should add the 10% and I would pay everything with my credit card. The waiter asked me whether I could pay the tip in cash. I said no. The waiter explained that, if I pay the tip with the card, the tax is almost 50% and the administrative cost is very high. In such a case they prefer to waive the tip.

I was very surprised, because to me that sounded like another model of how one can collect the money bypassing the tax authorities. It was alarming to see that cheating is part of the daily routine.

The system was introduced in December 2016. I read in the news that the revenues coming from VAT in the last quarter rose by 15%. Has the economy grown so strongly, I wondered? Or is it more to do with the controls?

It is evident that there is scarcely a system that can’t be outwitted. One can always cheat.

2 thoughts on “One can always cheat”