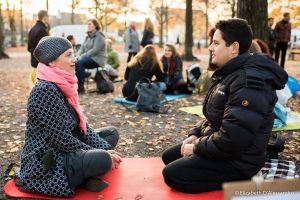 When you look back in ten, twenty years, what will remain in your memory? An examination passed? The first kiss? A special book or a film?

When I think back, there are several things that I’ll remember. For example, the Robbie Williams’ concert more than eleven years ago in the Stade de Suisse in Bern, when Robbie entertained the sold-out stadium without technical effects, without dancers and videos, almost single-handed. The public simply „boiled“ – danced, sang and clapped with him. This September Robbie was again in Switzerland and it was brilliant and super-entertaining. Robbie has put on weight, but he can still put on a good show. Although it was great, I’m not sure that in ten years I will still remember it.

Or the book «Sophie’s choice», in which a Jewish mother from Poland in a concentration camp must take the conscious decision, which of her two children she will send to its death and which to forced labour with a chance of survival. Even today I get goose pimples, when I think of the passage in the book. Then I wept.

Or 9/11 with the pictures, which I first thought were fake, because the reality was too cruel that I found it difficult to believe.

Material things that I can think of are only a dress, which my grandmother had sewn for me and so certainly contributed to my being able to win an incredibly good placing in the national dancing competition.

Last Saturday I was in town. On the Lindenhof in Zürich one could sit on the ground and for a few minutes in silence look into the eyes of a stranger. I was curious to see how difficult it is. It was easier than I thought. But of the other person I experienced nothing. The other person’s eyes were light blue and reminded me of my grandmother. The look took me back to my childhood and reminded me of our shared experiences. The journey was enjoyable and only reluctantly did I leave it. The second pair of eyes was emerald green and brought back memories of my childhood friend. And so it went on. It was enjoyable, but I didn’t learn anything new.