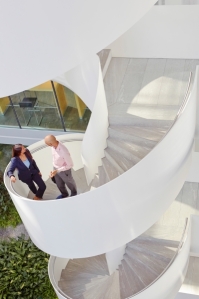 In the last years I listened to several of my colleagues. They are successful and well respected men, who often told me with tears in their eyes the stories of their marriages, their relationships. The stories were about women, who had informed them out of the blue that they did not want to continue living like that and that they would move out tomorrow or wished that the partner moved out as soon as possible. My colleagues were shocked and not at all prepared for such news. They did not understand the world any more. The glass cube of the relationship seemed broken and beyond repair. All these stories I heard from working men, who are very successful in business life and much absorbed and probably had not realised that at home many things were going wrong. The end of these stories was very different. Some accepted the news and tried to cope with the new reality. But more than half of them started to fight and it was very satisfying to see that also in situations, where there seems to be no way out, the wheel can still be turned. Some of them are living today happy with their wives, others did not manage.

But now something seems to change. Recently my working female friends are the ones who tell me similar stories. They are about men, who stayed at home with the children because they would have earned less than their highly qualified wives. But it is still the women who leave their families and move out because they cannot bear it any more. The consequences seem serious; one salary – even if reasonably high – split on two households leads to tighter financial circumstances. Everything gets organisationally and technically more demanding and arduous. And still the women tell me that they feel better now. From the outside it seems that these stories only have losers. Whether that’s correct is hard to judge.

However it is obvious that emancipation not only found its way to different ways of living but also to divorces and breakups. One of my female friends told me that a woman still always has a “2” on her back. Perhaps she is right. At least to the outside. Internally it can be questioned. Finally she was the one, who moved out.