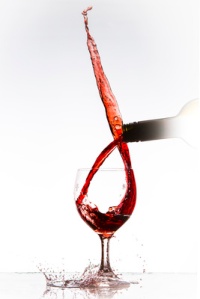 I’ve been in the business a long time. Not forever, but already quite long. This September I had my 20th anniversary with the firm. I would like to have said celebrated, but that wouldn’t have been true, because there was no celebration. 20 years with the same employer, today that feels like eternity. I wouldn’t even have noticed it myself, if one fine day I hadn’t found a box of wine on my desk.

At first I thought that must be a client, to whose success I have made a significant contribution, who wants to thank me. But in my professional reality that scarcely ever happens. I can remember a few flower bouquets, when I had successfully concluded difficult cases, but one could count these bouquets on the fingers of both hands. That’s about one bouquet every two years and the last few years have been very lean. And their absence can’t be the result of the lack of successfully concluded cases.

So I found the wine and wondered why it had found its way onto my desk. Then I saw the card. Then I remembered that I had received a similar box some years ago and that was my 10th anniversary. Was I pleased? If I’m honest, not really. I like drinking wine, but only when I‘m not at home and with friends. At home I now drink practically no alcohol. It is a good wine that I can keep and perhaps one fine day my heirs can sell it with profit at a wine auction. I don’t want to be ungrateful. I was pleased to receive a gift, but, to be honest, I would have preferred it, if someone had passed by and said to me: „Great, that you have already been with us 20 years. We appreciate your work and are happy that you are here and that you are staying here.“

At the same time I had to look at myself. Wait a moment, do I know how long my people have worked with me? Do I know when they have an anniversary? Honestly, no and I had to set up a database to be able to monitor the situation. As I myself have not been able to congratulate my own people on their anniversaries, I cannot expect it from others. It’s a question of respect and that regardless of an anniversary. Do I demonstrate adequately that I value the work of the others? Probably not enough. Do I say often enough how valuable I find the contribution of the others? Certainly not consistently. Scope for improvement en masse. So I have again made the resolution to be more attentive and tell the people more frequently how much I appreciate and admire their work.

I work with fantastic people, with exceptional talents, whom one meets only once in a lifetime and I have the uncanny good fortune to learn something new from them almost every day. Previously, I could claim to be able myself to contribute the best knowledge, the best approach, the most successful application. Those days are well past. Years ago I realised that with the complexity of the modern world only in a team with very different talents, skills, knowledge and experience can one be successful. I work with people with the most varied training from lawyers, over economists, chemists, physicists, mathematicians and one could continue the series for ever. Many of my staff can do things that I can’t. Things in which they are vastly superior to me. Ten years ago that was not the case, today it is normal.

At 18 I thought I was the best. In the meantime I am very modest and humble about my own ability. I am surrounded by critical, creative people, whose opinion often differs from mine. Thanks to these differing opinions and the fact that the boss is NOT always right, we set incredible things in motion and shape the future in our field in ways, which in the past I could never have imagined. Earlier, it was the law, its interpretation, Excel tables. Today it is also processes, strategies, roles and responsibilities, data analyses. It is technology – smart software, which in seconds does with absolute reliability, what 10 years ago one did for days on end with minor errors.

When I commenced my career, I would have wished that my colleagues, my employees would stay with me for ever. Unfortunately that is not real life. Although some of them have already worked with me for more than a decade, it is rather the rule that they leave me for various reasons. Earlier it hurt me a lot. I invested in someone, sweated blood to get the best out of him/her and when the time comes, the person left to learn even more somewhere else. Fifteen years ago for me it was almost treason against the common cause. But for a long time I have understood that it is really an honour and an enrichment that such different people have «accompanied» me for a time in my professional life. The result is that after 20 years my former colleagues, whom I recruited and trained, can be found in many locations in business. A great feeling that some of my principles were carried out into the world.

I can remember that many years ago one of my bosses said to me that at the latest after 5 years one must change one’s job before the skeletons come out of the cupboard. For me that was a strange strategy. I hold the belief that, if for any reason tomorrow I should no longer come to work, everybody would know what to do and that no skeletons would be found.

Thank you to all, with whom I was able to work in the past. It was a great experience, which has helped me on my way. I look forward to the next 10 years.