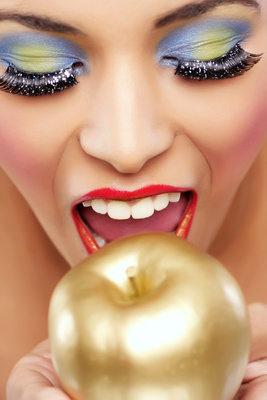 Livia had always been convinced that the sole purpose of this world is to serve her and to honour her uniqueness. Unfortunately, it was usually only her opinion. Therefore, Livia had to develop strategies to achieve the desired effect, which was not at all easy.

Livia grew up in a small idyllic town. Wonderfully remote. She was surrounded by modest, satisfied people. But Livia wanted more. She wanted the wide world, where glamour and luxury were important. As soon as possible, she packed her goods and left the confining corset of village life.

She looked for a job in a prosperous family, hoping that she would appeal to the man of the house and take his wife’s place. That alone was fairly difficult, because she could speak only her native language and she found no pleasure in the housework, including cooking. The outcome was obvious.

Finally, she succeeded in finding a job abroad with a family from her home country as an au-pair. Only, unfortunately, this family was by no means prosperous, but rather short of funds. For Livia, compared with her village, it was luxury, but she soon noticed that the family, in which she worked in accordance with the local conditions, belonged to the lower middle class. Miserable, she thought and felt no desire to separate the husband from the wife. Another strategy was needed. Livia worked hard on the local language, but the millionaire she hoped for was not to be found in the language school or in the bars she could afford. Once again she had to change her strategy and as she had had enough of the foreign “brats”, she simply had to find a good sponsor.

She found him in her fellow countryman, who with his parents had immigrated as a child and was in the course of building a successful career. Livia left the family and moved in with him. And to make sure that everything turned out as she imagined, she soon became pregnant. They married. Livia was satisfied and laughed about her sister, who had stayed in the village and had married a lumberjack for love. “No prospects”, thought Livia and looked down on her own sister.

Only too quickly it became clear that it was not much fun being a wife with a baby. The husband, who was making a career, but still had little money, is absent all the time on business trips or training courses. Luxurious this was not and the quarrels at home became ever more frequent.

Livia thought that she had to get out and began a new search. It didn’t take long before she found him. He wanted her even with the stranger’s child, was quite a lot older than she was and fairly wealthy. But she had to wait another two years, until she received the permanent residence permit.

Livia planned every step exactly. She stopped being nasty to him, but at the same time made a list of the things she had to prepare. After two years the time had come and when her husband had to go to China on business, she cleaned out all the accounts, packed all the valuables and changed the magazine subscriptions that had been paid to her new address. The she moved out and applied for divorce.

The divorce was a battle and Livia achieved the maximum. He paid for the child, he paid for her. There wasn’t much left for him.