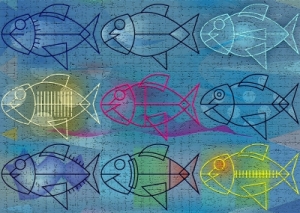 Our female betta-fish Minus has not really won our hearts. First she fought with her male partner Plus, who was deadly injured and then she killed her companion, our snail Schneck. This was too much brutality in such a small area for us beginners. We somehow sensed, that we may have contributed to this tragedy due to our incomplete knowledge.

This all happened in spring. Since then, we have gotten used to Minus‘ aggressiveness. We observed her as she grew bigger and admired the array of colors this small Body was able to show to us.

Minus was trained much like Pavlov’s dogs. At feeding time, she would look at us approaching the aquarium and be ready to eat. We could not forgive her the two murders, but we have taken care of her with great commitment. A couple of days ago, her eyes suddenly grew bigger. She lost her appetite and hid in the plants on the bottom of her aquarium. We were worried. When she then grew a bump on her small body, we knew we had to do something. But do you take a fish to the vet? It was obvious, that we should help her. We have bought her, we were responsible for her life as her pet and for her recovery.

That evening, I went online and learned a lot about the diseases, that can occur in fish. It was challenging and quite frankly depressing. You wouldn’t guess how much suffering there is to be found in a small fish tank. After hours of research I had a diagnosis: a disease called dropsy. And I had found the meds to cure it.

We put Minus into a smaller bowl with added salt against the infection. And the day after we bought the medicine and added it using the correct dosage, which is no simple feat.

The day after, Minus was dead.

I felt grief combined with failure. My little one built a coffin and we buried Minus next to Plus in a corner of our garden.

The aquarium sits there empty, but we are lacking the strength to put it away. I have a feeling that this wasn’t the last fish living in our household. We still need time to mourn and to deal with our own anger. But I am certain this story will be continued.