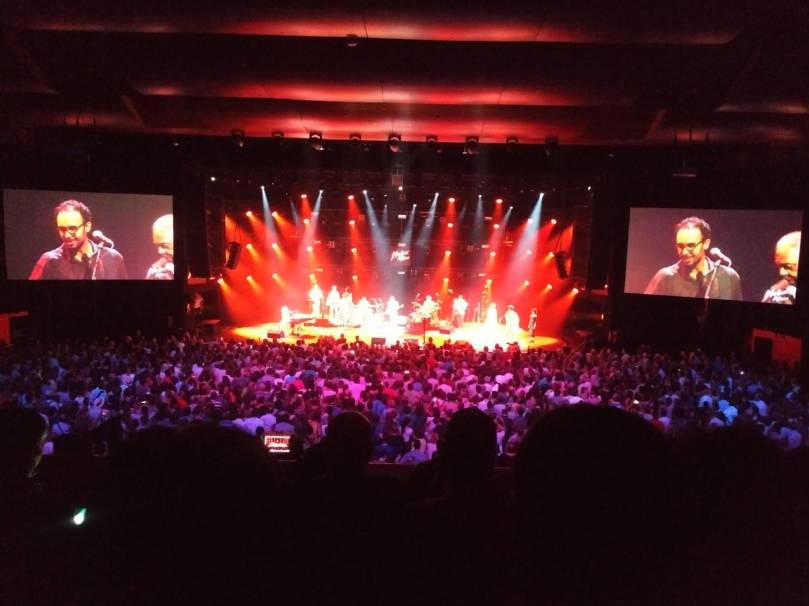 I have read so much about the festival that I thought I must go and have a look. I chose Gilberto Gil, Margareth Menzes and Mart’nàlia as the musical highlight.

I had already been in Montreux a few times, but up to now I had always experienced the little town as a wonderful, manageable idyll for those of advanced age. Therefore, my expectations of the festival were high and of the town rather modest.

I was able to buy one of the much sought-after tickets, but, when making my plans, it became clear to me that I would not be able to return home to Zürich after the concert.

The search for accommodation proved to be difficult, because numerous other people had a similar idea. In an emergency, one cannot be choosy. I booked a not cheap accommodation with a view over the lake closer to Schloss Chillon than to the town centre. On arrival the hotel turned out to be a nursing home. Everything was wheel-chair accessible. The door frames were unusually wide and from the design and the furniture it was clear that it was built for a public, to which I hope I will not belong for a few decades.

The lake view from my room was breath-taking, the people in the house were extremely pleasant. I felt as if I was with grandmothers. Cosy and cared for. Even the fitness room was special. With a view over the lake and the mountains I bounced on the trampoline sweating and at peace with the world, grateful for the privilege of having found this place.

After showering, I set out for the concert and I soon realised that Montreux had changed itself into a single palace of joy. Everywhere there were high-spirited people, laughing and happy. A crowd as at the main station at rush hour but without a trace of hectic. Exuberance, summer, physical and human warmth. Music everywhere.

I drank Rosé Champagne, joined in the applause and the time passed in a jiffy. Shortly after midnight, when the concert had ended, I had no desire to go home. It wasn’t necessary. The streets, clubs, promenades, restaurants were full as if everything had just started.

I danced throughout the night to various tunes, joined a group of exuberant people, who were using several languages, of which I am fluent in only about half. Whatever. It was not necessary. It was like a cleansing bath. Cares, chores, tomorrow and the day after were washed away. A youth fountain for beginners. Somehow I was 18 again, without a care in the world, without duties and responsibility, living only for the present.

Reluctantly, as night turned into day, I said good-bye and went to bed. I fell asleep immediatelyand slept likea log.

I can’t say much about the artistic qualities. I don’t understand them. But I enjoyed it very much as did thousands more. If you are looking for a tip for youth fountains for the soul, I can only recommend the Montreux Jazz Festival.