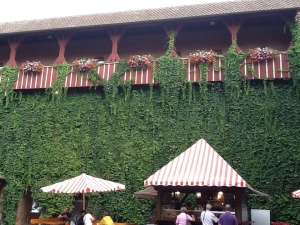 Within 24 hours I could watch the big male yearnings twice from close. First I was at the Nürburgring. Men of all ages had only eyes for the racing cars standing or driving around. And it was good like that because there was not much else to see. In the middle of the forest, in the middle of nowhere tarmac curves without end in order to test how to rev up an engine. Deafening, dominant noise, squeaking tires, just the smell of petrol was missing. The eyes of the men were shining. The male visitors were physically there but at the same time they were not, unreachable immersed in their dreams. The joy, fascination could be felt and materialised in a collective experience. Women were rare respectively there were hardly any and if there were, they had rather eyes for the fascination of the men they were accompanying than for the cars.

And then, a few hours later I was in the old town of Nuremberg and watched how the best free riders in the world rocked the city with their bikes. They were flying men with bicycles. The Red Bull District Ride had attracted the best. Everything started at the Kaiserburg on a ramp, which was about 20 metres high. The bikers jumped with their bikes from the castle wall, landed on the ramp and raced to the next ramps through the alleys, passing the Sebalder Höfe and the Rathausplatz up to the Hauptmarkt. The feats they were showing were breath-taking. Somersaults with the bike up in the air, jumps where one was wondering whether it would end well. Yes, everything ended well, very much!! Because they were the best in the world and what they were showing cannot be seen very often. Staged in the old town one could see pictures which were as unique as the solar eclipse. The bikers were all men. I did not see a single female biker. But all the more among the visitors because the admiration spread equally among both sexes. What these guys were showing did not leave anyone unaffected.

They are there, the differences between sexes. And it is really goods this way. Every now and then I have the feeling that we would like to rationalise these differences or even forbid them. One can only hope that this will never happen. Let the men show their breath-taking acts, let men watch fast cars in tight curves with shining eyes. A uniform world without differences would be very boring.